We were approached by the Lin Family to design a 4 bedroom house on a reasonably suburban site in Remuera, Auckland. The challenges of the site was that the northern aspect was facing the street and the site was surrounded by neighbours which need to be considered to maintain the privacy for any outdoor spaces.

The concept driving the house was a fusion of kiwi laid back living and asian inspired detailing and materiality. We created a series of courtyard spaces making the most of the north aspect by creating a courtyard to the street that housed the pool, with the open plan living area facing onto the courtyard. The main bedroom above cantilevers into the courtyard, providing an outdoor dining area sheltered from the rain.

Cars, which traditionally dominate the frontage of the suburban context, are accommodated halfway through the house, thus allowing for enough space for the pool courtyard and creating a separation between the main living area and the media room and guest bedroom. The dramatic curved forms on either side of the garage were designed to accommodate the turning circles for the cars. Inside, the cast insitu concrete curved walls accommodated the scullery and the laundry on the ground floor and an ensuite on the second level.

The detailing of the house drew heavily on the homage to the landscape often seen in asian architecture. The cast insitu concrete wall in the entry was formed using bamboo formwork creating a beautiful textural and soft quality to the concrete. The 'lineal courtyard' framing out the neighbours with an edge of bamboo and accommodating another outdoor area with an ethanol fire was inspired by the entry to the Nezu museum designed by the Japanese architect Kengo Kuma in Tokyo.

The kitchen was designed for asian cooking, with a full chef's cooking scullery elegantly hidden behind the more traditionally styled kiwi galley kitchen. All the timber cabinetry was a textured oak veneer with a natural oil finish. 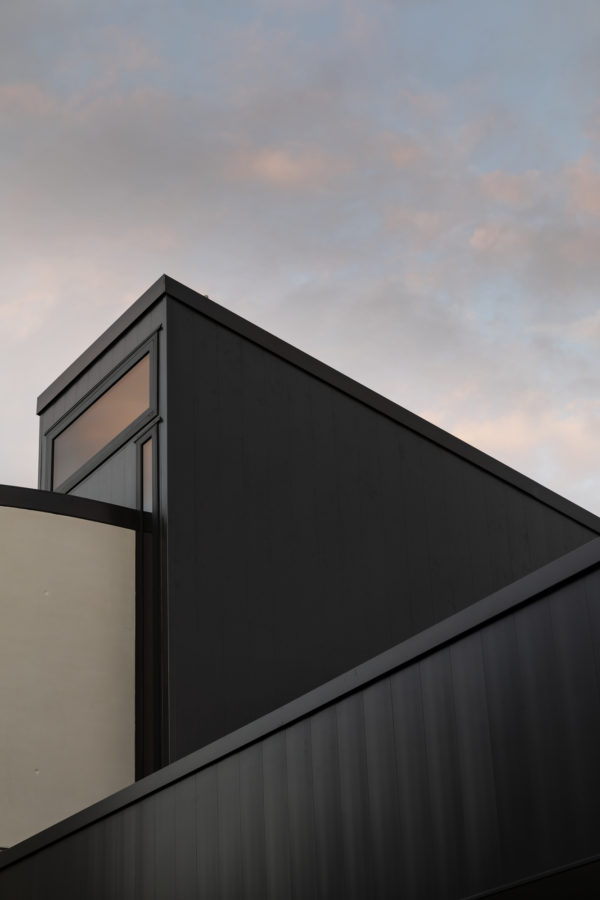