The ridges of a hill. A forest clearing. A lost stream. The sea coast.

Colonisation saw the burning and clearing of the native forest in the bay during the late 19th century. A Villa was constructed on the site in 1905 and a boathouse constructed in the 1970s blocked the mouth of the stream. A queen palm stood at the rear of the Villa as the shore was dominated by giant macrocarpa that darkened the valley. Since the construction of the Villa 111 years ago the bush crept back to form a small clearing, whilst the Villa deteriorated beyond repair.

The clients were a family living abroad that commissioned us to design a holiday home that included a 20m pool as they wished to form a connection back to their native Aotearoa.

Our response to their new house was to orientate the length of the building alongside the ridge-line in parallel to the coast, stepping down in a total of 4 levels. The bedrooms cascade down the hill while the main living pavilion is sited where the Villa once stood. The concept for the glass pavilion was to take advantage of the 3 different conditions; the coast, stream and the dense native bush. They operated simultaneously, with limited space available on the site. Without damaging any native trees, we placed the swimming pool under the main pavilion; parallel to the stream, which created an intimating pool area and a dramatic cantilever of 6m for the living pavilion above.

The materials were a limited palette, dark cedar for the bedroom pavilions, low reflective glass and concrete for the living pavilion. A local stone wall which hides the boathouse and supports the parking area above which also serves as the entrance to the house.

The macrocarpa (Monterey cypress) that dominated the shoreline were removed and was replaced by several thousand native plants while a pest eradication programme recalls to have seen rare Kaka and Weka birds return to the valley.

The house can be entirely self sufficient, with its own sewage treatment and a large solar system to provide power.

In Feb 2020, weeks before practical completion and hand over to the client, an accidental fire tore through the house, destroying the 2 upper pavilions but leaving the lower concrete pavilions almost undamaged. The house was rebuilt and completed in Feb 2021. 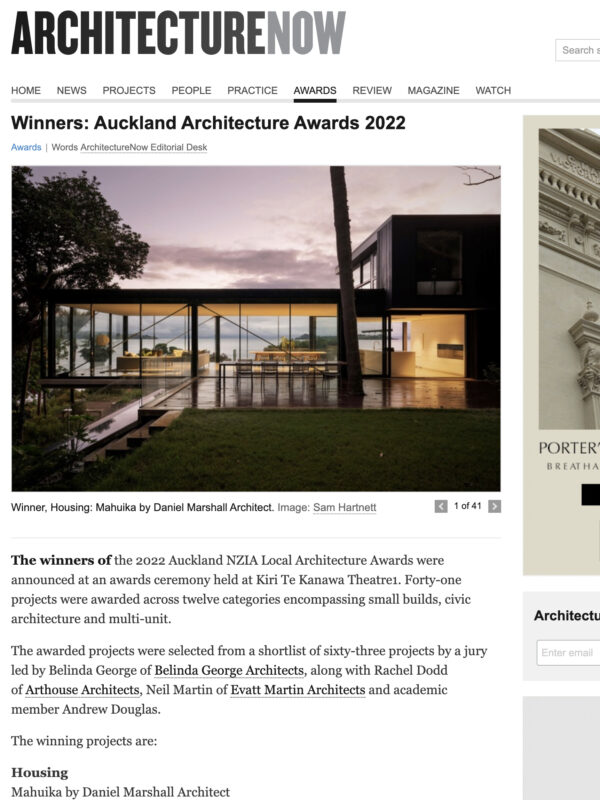