DMA were approached by the clients after seeing another of our houses. Their site was a 600m2 recently subdivided site, with a rather unusual road frontage in that it was tucked below Upland Road and serviced by a feeder alley way. The clients had 3 boisterous teenage boys and were after separate living areas for the boys and bedrooms that were identical to avoid squabbles.

Our approach to the the site was to arrange the house across an L formed plan, with one edge of the L creating a 'wall' against the busy road. The living areas and master bedroom were on the upper level, reached by ascending a 1/2 flight of stairs that gently ascended through the palm springs inspired front garden. This made the most of the views between surrounding houses of the tree filled valleys of Remuera to the city skyline beyond. The lower level consisted of the double garage, the access being gently sloped down from the alley, The 3 boys bedrooms, each with identical ensuites and a kid's den. All these spaces were arranged around a 'courtyard' formed by the L plan that contained the north facing pool.

The form and materiality of the house were kept deliberately low key, with a sculptural play between the two materialities- precast concrete and black stained cedar. The roof lifts up toward the street, with clearstory windows that allow the morning light to flood across the ceiling deep into the house while protecting the privacy of those within. The ceiling is lined with timber acoustic panels which mitigate the sound refraction from the beautiful but acoustically bouncy polished concrete floors. 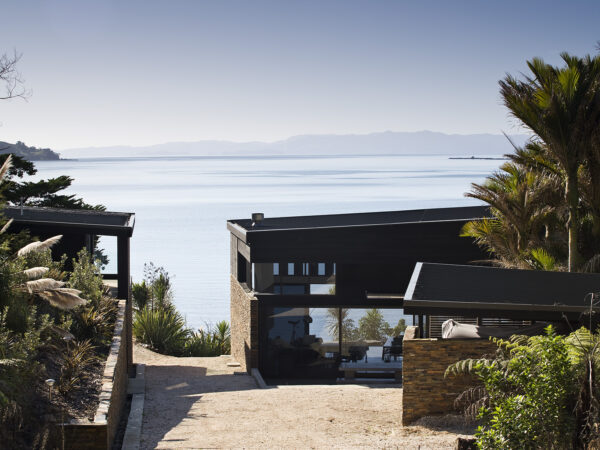